On a wall in east London, two giant crows loom over two young women who are swinging a rope. As a child jumps over the skipping rope, he approaches a hole in the ceiling above him. But if he finally jumps high enough to rise above the confines of the concrete ceiling, he will become prey for the waiting birds.

This is a mural by Mehdi Ghadyanloo, an Iranian artist who is about to have his first exhibition in Britain. It is an unexpected addition to the walls of Shoreditch; the neighbourhood famous for its street art rarely sees anything as subtle as this. As if to make the point, a car park nearby is plastered with ugly, third-rate graffiti. Ghadyanloo, by contrast, makes use of trompe l’oeil, the technique invented in the Renaissance of using perspective to create eye-fooling illusions. It is eerily arresting and poetic.

Ghadyanloo has more in common with the metaphysical painter Giorgio de Chirico than he does with Banksy. Yet in terms of success as a street artist, he is undoubtedly the Banksy of Tehran. Astonishingly, there are over 100 walls in Iran’s capital decorated by Ghadyanloo. His murals are so popular, he tells me, that there are even imitation Ghadyanloos: “Sometimes districts order my works to be painted by other people. There are many copies of my work in Tehran.”

His paintings are not illegal. On the contrary, he was commissioned by the city government to paint them. Nine years ago – in 2006, or by the Iranian calendar, 1384 – “the municipality published a call for artists”. Fresh out of an art course at Tehran University, he applied.

Tehran is a city of blank walls, he explains. “I heard Tehran still has 5,000 blank walls to be painted. They said: ‘You can find your wall and suggest your idea.’ The Beautification Organisation liked my works …”

No wonder. Ghadyanloo’s murals in Tehran open windows in the sky. He sees them as a utopian protest against the city’s pollution and smog. “Sometimes you have only grey skies. I wanted to paint clear skies. I would like Tehran to be like my works.”

Using his mastery of trompe l’oeil, he paints huge walls with what he calls suggestive moments from unwritten short stories. His scenes are dream-like, ambiguous. Cars fly in space in a science-fiction city. Holes open to reveal blue skies. Fairies peep through the portals. People walk on roofs. “I want to give a smiling moment,” he says.

But that’s the public Mehdi Ghadyanloo. He freely acknowledges that when he paints the walls of Tehran he puts on – as it were – an upbeat facade. “While I’m working on walls, I feel responsible to my audience. But in my personal works, I do what I want.”

Freed from social responsibility, his canvases on show at the Howard Griffin Gallery take his surreal style into more troubled corners of the psyche. A crowd of people stand beneath an immense stone cube that may fall and crush them any minute. Why don’t they run? In other paintings, people gaze into voids, or are crammed into boxes.

“While I’m painting these, I feel like one of these people under stones,” he mock-grimaces. “My works on canvas are closer to my own character.”

Ghadyanloo is clearly influenced by surrealist art. Echoes of Magritte and Max Ernst hover in his paintings. Not only does he like surrealism but in conversation, he quotes their hero Freud, and attributes his images to the “subconscious”. He’s a surrealist through and through.

In one of his paintings, an impossible, hollowed-out jet plane hangs over another of his helpless crowds. It has something in common with Max Ernst’s collage Murdering Aeroplane. But Ghadyanloo explains that its origins are very personal.

“Growing up during the Iran-Iraq war had a strong effect on me. As Freud said, our childhood shapes who we are. My father was a soldier. He was in the front line. My mother was always waiting for good news of my father. I think it’s one of the reasons I have fear in my work.”

His menacing aeroplane comes from those childhood fears. “We had air raid warnings in Tehran. When I think of a plane I have these fears.” Then he laughs: “I have many fears!”

Out on the street, he explains that his new murals in London are different from the dozens he has done in Tehran. His London street art is personal and haunted, more like his canvases. Little people float lost on the wall of an Asian streetfood restaurant. Then we come to the powerful scene of the boy skipping upwards, towards freedom, towards death.

Living in the Middle East, he says, the news brings fresh anxiety every day. “It affects your subconscious – and you have always this subconscious fear.” The birds are waiting for the boy to leap on to their beaks. 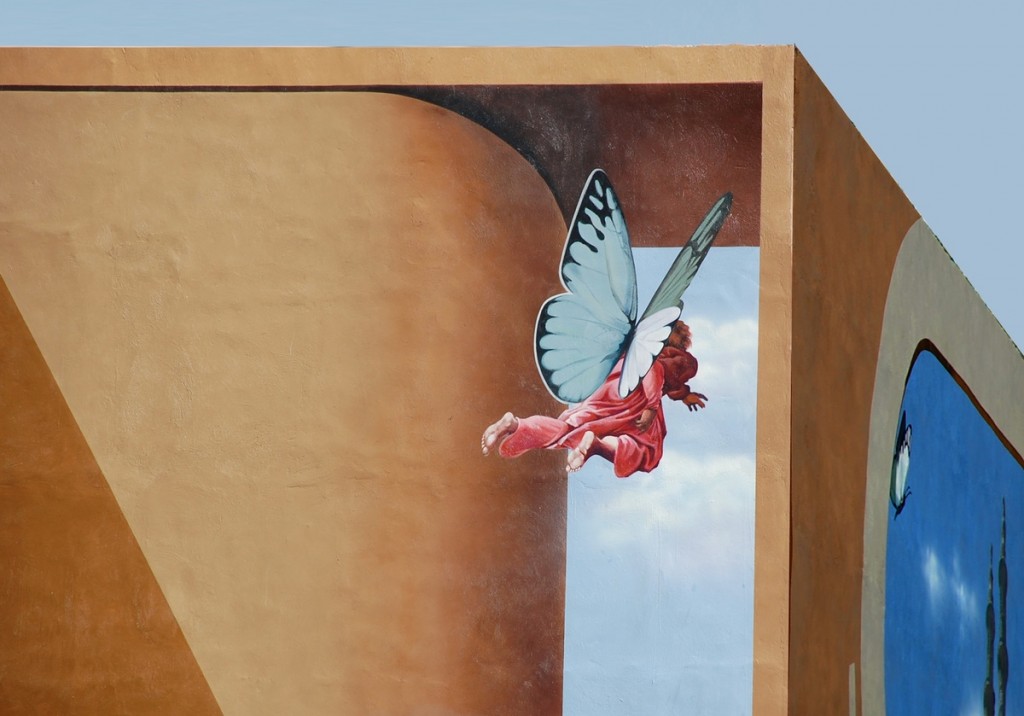