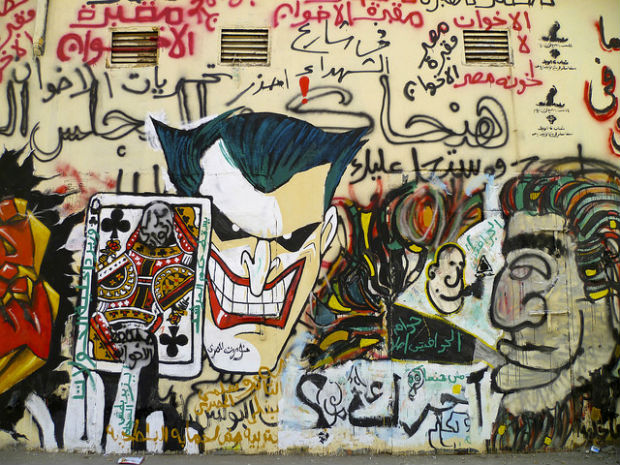 Before the January 2011 uprising, street art was little known in Egypt. Then came the revolution and with it, an outburst of creativity.

With the fall of the authoritarian regime of Hosni Mubarak, Egyptian artists who had routinely faced censorship restrictions under his autocratic rule, felt a strong urge to break out of the confines of their studios and reclaim public spaces. Young artists in particular, decided they needed bigger canvases for the grand ideas they wanted to convey through their paintings. To celebrate their newfound liberation, many of them took their art directly to the people and onto the streets, expressing their views and opinions on public walls and on the sides of buildings.

Bonded by their shared aspirations for a better Egypt, the young graffiti artists spent long hours working together, creating vivid group murals that told the stories of the revolution in which they had actively participated. The images they produced in the months following the 2011 uprising documented the dramatic changes that were unfolding in the country, the continued unrest ensuring a steady supply of material for them to work with. The artists also spread powerful messages of “equality” and “freedom” that helped shape public opinion, attitudes and values.

“Our murals added colour to the otherwise dull streets and boosted the morale of the people. But as graffiti artists and activists, we also played the role of the ‘alternative critical media,’ telling the untold stories and spreading messages that helped the public better understand what was really happening on the ground”, said graffiti artist Salma Sami, a graduate of fine arts who has also worked as a broadcaster.

An image of Pinnochio on TV, spray-painted on a wall on Mohamed Mahmoud Street, off Tahrir Square, shortly after the fall of Mubarak, was intended to poke fun at state media — for long, a propaganda tool of the ousted Mubarak regime. According to Sami, the mural also “serves as a warning to Egyptians not to believe everything the media tells them”.

Besides being a critical voice, raising awareness and informing the public of the events unfolding in the country, Cairo’s nascent street art movement also helped keep the spirit of the January 25 revolution alive.

“As a woman, I wasn’t accustomed to working in the street and was afraid at first especially after hearing stories of sexual assault incidents in the very neighbourhood where we worked. But once I started working, I felt safe. Working in a group helped us revive the spirit of the revolution, letting go of our fears and uniting behind a common goal,” Sami said.

The street artists successfully managed to break down social barriers of class, religion and gender. They created a close-knit community among themselves but were also accessible to the public. “Crowds would often gather to watch as we worked and then, someone would volunteer to help. Soon, we would find others joining in. The fact that a lot of our work was painted with roller brushes made it easy for anyone to participate,” Sami told Index.

Like Sami, Bahia Shehab — an art historian and graphic designer — was also very much a part of the street art movement that emerged and developed after the 2011 revolution. Her trademark “no” stencils, spray painted on the walls of Mohamed Mahmoud Street have helped draw public attention to social problems, exhorting Egyptians to take a stand against violence, oppression, and other forms of injustice.

Shehab joined the street art movement nine months after the revolution when she saw an image of a protester’s corpse dumped in a pile of rubbish in her Facebook newsfeed. The gruesome picture, which had gone viral on social media networks, so infuriated her that she rushed to Tahrir Square to express her rage. Her stencilled message “no to military rule” marked the beginning of her “thousand times no” campaign — a series of images decrying torture, sexual violence and other issues she felt strongly about.

Carrying on the idea from her 2010 book — a compilation of “one thousand no-s” in a multitude of Arabic calligraphy styles — she added a range of fiery messages denouncing rights abuses that were committed during the country’s transitional period. ”No to violence and thuggery”, “no to stripping girls” and “no to sectarian divisions” are just a few in her long list of stencilled images.

More than three years after the uprising that toppled autocrat Hosni Mubarak, Shehab says her “old” list is “still relevant” and her concerns “still valid”. She continues to consistently add more “no” messages, saying she is “deeply disappointed” with the turn of events in her country. Among the new additions is a stencil calling for an end to the brutal security crackdown on dissent.

A nationalist fervour sweeping the country has however made it dangerous for graffiti artists to express themselves freely. Those who dare criticise government policies are often accused of being “traitors” and “terrorists” by self-proclaimed “patriots”. Today, while many of the young street artists view former army chief and current president Abdel Fattah el-Sisi as merely the new face of the old military regime, few dare depict him in their artworks. Sisi came to power following the 2013 coup that overthrew Egypt’s first democratically elected president, the Muslim Brotherhood’s Mohamed Morsi. Several established street artists have chosen to remain anonymous, signing their artworks using nicknames for the sake of their security.

“Working in the street has always been dangerous,” noted Shehab, adding that “the only difference is that the danger now comes from violent ‘patriotic’ mobs supporting the military where before it was from the police.”

But mob violence is not the only danger threatening Egypt’s street art movement. A proposed draft law banning so-called “abusive graffiti art” — if passed — may likely restrict artistic expression and may spell the end of the graffiti tradition, even before it fully emerges. Under the draft law, violators could face a prison sentence of up to four years or a fine of up to 100,000 Egyptian pounds.

The recent alleged murder of one of Shehab’s comrades — 19 year-old graffiti artist and member of the April 6 youth movement Hisham Rizk — has compounded her fears, sending shivers down many spines in Egypt’s artistic circles. Rizk’s body was found in a Cairo morgue last month, a week after his family reported his “mysterious disappearance”. A forensic report concluded that the young artist had died of “asphyxiation by drowning in the Nile River”. Sceptical fellow artists however, believe Rizk’s critical views of the government expressed in his drawings and on Facebook may have instigated a confrontation with security officials that led to his death.

“People don’t always agree with our views and different people interpret our artworks in different ways but at least our murals provide food for thought,” noted Sami who, in early 2012, designed a controversial mural depicting a skull with a military cap, holding a flower between clenched teeth. The image was a fitting portrayal of the brutal military regime that replaced Mubarak after the revolution. The 18-month rule of the Supreme Council of the Armed Forces (SCAF) was marred by political turmoil and violence including forced virginity tests performed by the military on female protesters

You can still see Sami’s mural on Mohamed Mahmoud Street, along with many others that are critical of both SCAF and the Muslim Brotherhood. The latter are depicted as sheep, while military men are portrayed as butchers in some of the murals. The colourful artworks are reminiscent of a happier time of free artistic expression and hope — a phase that, some of the artists fear, may well be over.

Yet, both Sami and Shehab remain defiant, saying that neither laws nor intimidation will deter them from the journey they have started. They draw similarities between their art and the 2011 revolution, saying both are constantly shifting and come in waves. Their murals in downtown Cairo have been whitewashed several times with other artists painting over them or adding new images as new events unfold, sparking new ideas. “Sometimes, residents in the area paint over the images if they oppose our views,” said Sami.

“I no longer mind when my work disappears. When that happens, I just tell myself it’s time to design a new stencil and I head straight back to Mohamed Mahmoud Street.”