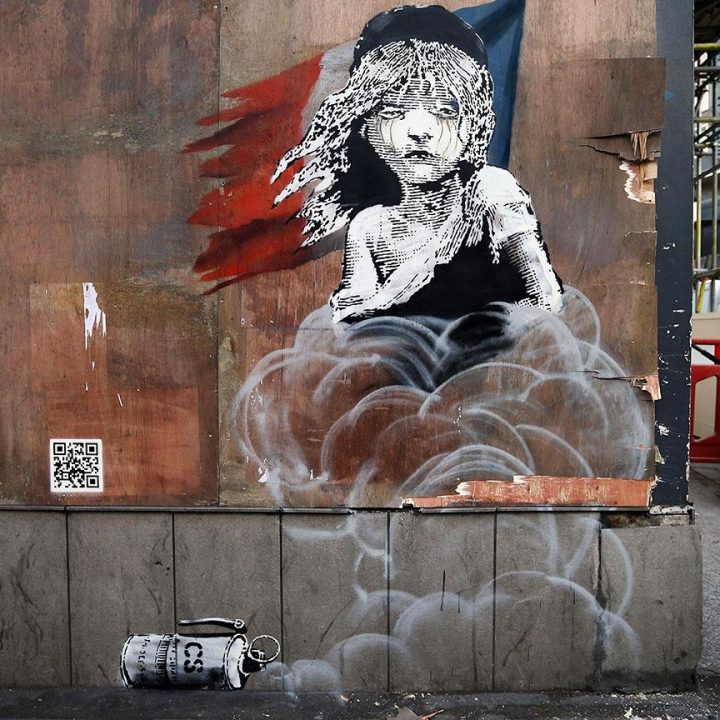 To see interesting art you don’t have to go to a gallery, you just have to walk the streets. One of the most reproduced images of the past couple of weeks is a mural, commissioned in Brixton, of David Bowie, by the Australian street artist Jimmy C (James Cochran) which now acts as an unofficial shrine. There are critics who exist simply to say that if something is popular it is by implication bad. Those people like their art defined, refined and confined. All else is vulgar.

Along with Cochran, Banksy has also raised the street art bar with his new interactive piece opposite the French embassy. It shows the poster girl from Les Misérables with tears in her eyes. Next to her is a CS gas canister. There is a stencilled QR code (which can be read by smartphones) that takes the viewer to a video of teargas being used in a raid on the Calais refugee camps earlier this month.

The use of QR codes in street art is not new – in Berlin an artist called Sweza uses QR codes to take viewers to audio or sometimes images of what has now been “cleaned away”. What Banksy is doing is overtly political, as was his mural of Steve Jobs (the son of a Syrian immigrant), which has since been vandalised in Calais, as was his Raft of Medusa next to the town’s immigration office, as was his shipping of the leftover structures of Dismaland to help build emergency housing for the migrants there.

Street art reminds us both of what we have to fight for, and what we have lost – I love street artist Stewy’s Tony Wilson stencils all over Manchester. And this use of street art for commemoration has been growing. Remember the Banksy and all those other images that appeared when Amy Winehouse died? She now, thankfully, had wings. Malcolm McClaren appeared at the end of my road (where he was born), in a brilliant stencil by Stewy, which was soon painted over by the council. Stewy’s Mary Wollstonecraft still resides near me and makes me happy every time I see it, this charting of an alternative history.

The difference between street art and graffiti is one of aesthetics. Without permission, all of it is illegal. Graffiti is associated with tagging, gangs, out of control vandals. Those who make it can end up in prison. Britain is the only place in Europe that puts artists in prison. Between the ages of 17 and 24 the maximum sentence is two years. It’s more if you are older. This is for malicious mischief, vandalism, criminal damage. Quite who the victims are here is questionable. Graffiti is seen as essentially antisocial. And some is: the swastikas painted near a Jewish neighbourhood are, quite rightly, quickly removed.

Tagging is seen as something that has to be stopped. It represents an implicit breakdown of order, a marking of territory by gangs. The “broken windows” theory of urban decay comes into play.

The Home Office has launched a campaign against this type of graffiti and there is a national database of taggers. This zero tolerance approach is because they say graffiti creates fear. DC Colin Saysell, who helped to convict a gang of five graffiti writers for total sentences of 11 years, sees this as a deterrent. Some people, he admits, decide to go abroad where there is a radically different approach. Indeed, street art is an intrinsic part of Barcelona or Berlin.

Custodial sentences seem insane. As the artist Goldie says, what was once “a social menace” is now “subliminally making these cityscapes that bit more beautiful”.

It is also deep hypocritical when an artist such as Sickboy explains the crossover between “bad” graffiti and “good” street art, citing the Spanish artist La Mano as a major influence. He likes to use repeated logos, no stencils: “I like the freehand, grab-a-tin-of-spray-paint approach.” And while we criminalise graffiti artists, it’s ironic that, when David Cameron first visited Washington as prime minister, he presented President Barack Obama with a painting by Ben Eine, a graffiti artist who had recently sprayed the alphabet on shop shutters in a London street.

Is this something to fear or celebrate? Because I sure as hell miss the New York subway of the 1980s, ablaze with colour. Lately street art has been deeply social. Stik’s Big Mother, showing a mother and child holding on to each other, was painted as a huge mural on the side of a west London tower block about to be demolished. The luxury flats are going up around this mother and child. Stik, who has been homeless himself, has talked about the basic need for affordable housing.

Hackney Wick, in east London, has seen battles over “graffiti gentrification”, where street art becomes commercialised and sponsored “pay-as-you-go” walls. The real graffiti – “I came, I saw, I tried MDMA, my parents bought me a flat” – sums up the response to this nicely.

If our official artists don’t seem politically engaged it doesn’t matter, because our best ones already are. Next to the lovely new Bowie mural in north London’s Turnpike Lane is a quote on a white wall in big letters: “Darling look, it’s a commission!”; “Don’t be silly my dear, that’s just some vandalism”; “Oh right. Yes, of course.” For under that quote used to be a Banksy. That has been removed. And then auctioned. Of course.